10 Most Iconic Car Movies of all time 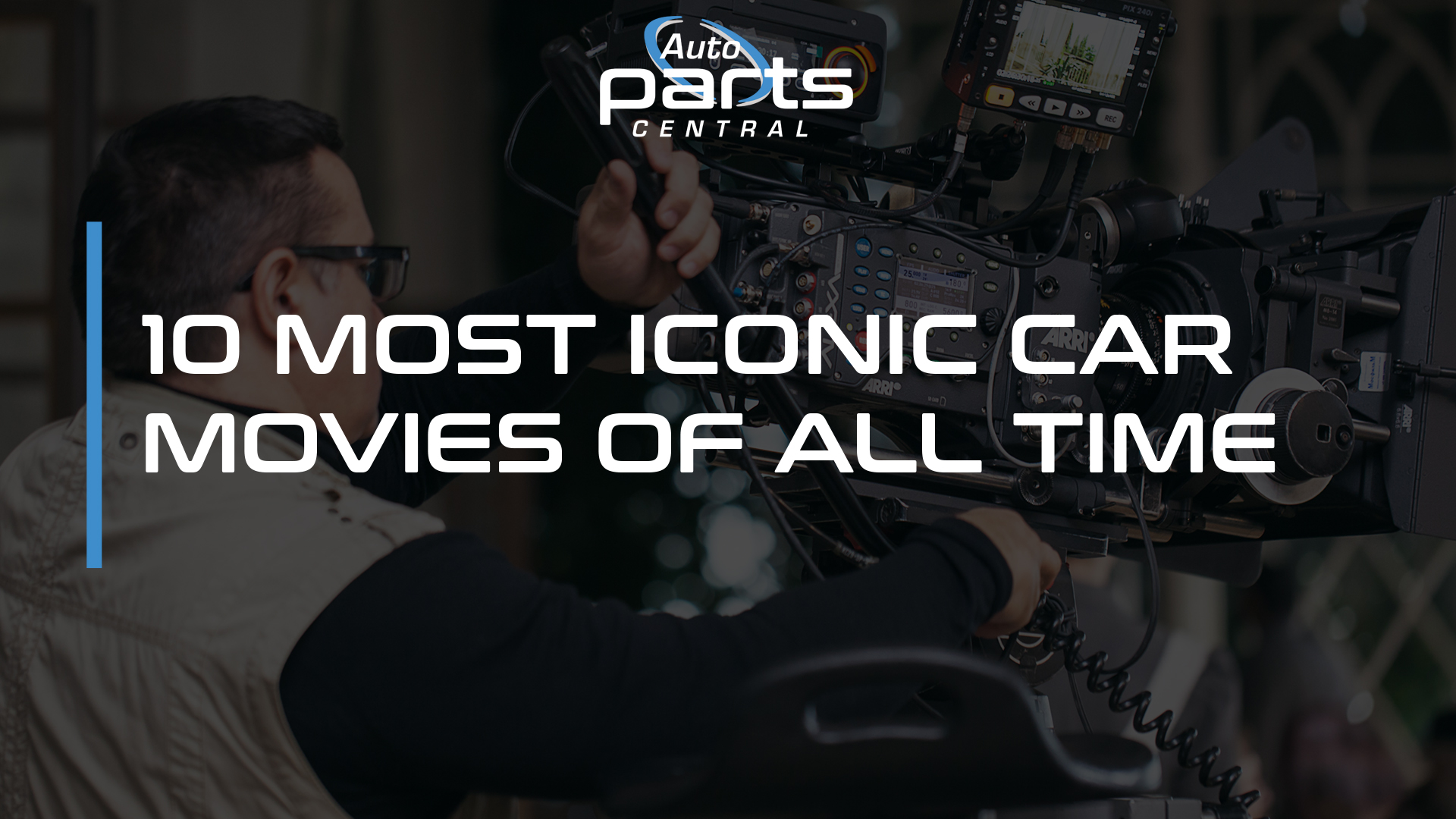 Whether it’s a scene where the car becomes a character in its own right, or the car is just a tool used by the characters to get from A to B, cars play a big role in movies. In this article, we take a look at some of the most iconic car movies of all time.

Just remember, this list is for iconic movies – so yes, if this was best (in terms of quality, production etc) the list would be different – but these movies are the top 10 icons in the automotive world, in our humble opinion.

Smokey and the Bandit, an American road action comedy film following Bo “Bandit” Darville (Reynolds) and Cledus “Snowman” Snow (Reed), two bootleggers attempting to illegally transport 400 cases of Coors beer from Texarkana to Atlanta. While the Snowman drives the truck carrying the beer, the Bandit drives a Pontiac Trans Am to distract law enforcement (called blocking) and keep the attention off the Snowman.

Smokey and the Bandit was the second-highest-grossing US domestic film of 1977, with $126 million against a budget of $4.3 million (only Star Wars made a higher gross that year), cementing the film’s status as a true classic.

The Fast and the Furious: Tokyo Drift is the standalone sequel to 2 Fast 2 Furious (2003) and is the third instalment in the Fast & Furious franchise. In the film, high school car enthusiast Sean Boswell is sent to live in Tokyo with his estranged father and finds solace exploring the city’s drifting community with Han Lue.  Along the Fast & Furious timeline, Tokyo Drift is set after Fast & Furious 6 (2013) and before Furious 7 (2015).

Why is this in our top 10? Well, Fast & Furious: Tokyo Drift is largely the last movie in the franchise to focus more on the cars and the driving than anything else, and Han’s awesome ‘Veilside’ RX-7 has been a cult classic ever since the film’s release.

Senna is a documentary film that depicts the life and death of Brazilian Formula One legend Ayrton Senna. The film’s narrative focuses on Senna’s racing career in Formula Once, from his debut at the Brazilian Grand Prix in Rio de Janeiro, to his tragic and untimely death in an accident at the 1994 San Marino Grand Prix.

Being that the film follows the life of the man who is arguably the greatest Formula One driver of all time, and is the highest-rated car movie on IMDB with a rating of 8.5/10, this movie is certainly deserving of a top-10 spot on our icon list.

A movie that doesn’t really need an intro – the original Cars movie was an instant hit from the moment it was released, grossing $462 million worldwide in the box office.

Largely considered to be the best of the 3-movie franchise, Cars raised the bar for animated family movies, and is quite possibly the most-viewed car movie of all time.

When watching this movie, no matter how old you are, you can’t help but feel like life is a highway, and that is why it makes our top 10.

A biographical sports movie centred on the rivalry between two Formula One drivers – James Hunt and Niki Lauda – Rush is set during the glitz, glamour, and rush of the 1970s.

The movie follows their rivalry from its roots, the 1970 Formula Three season, right through until the retirement of James Hunt following his Formula One World Championship in 1976.

Steve McQueen stars in this 1968 classic as Frank Bullitt, a San Francisco cop who is assigned to protect Mafia informant Johnny Ross. When Ross is killed, Bullitt starts investigating the crime and becomes embroiled in a deadly conspiracy, sending him through a maze of complications and double-crosses.

This movie features one of the most famous car chases ever filmed, featuring the infamous ‘Highland green’ 1968 Ford Mustang GT Fastback, featuring a 390 cu. V8 that had been modified to produce over 300hp.

The movie is iconic in many ways, from its car chase to everything that came from it – including the Ford Mustang Bullitts that were produced in tribute to the legendary 1968 Mustang. Moreover, in 2007, Bullitt was selected for preservation in the United States National Film Registry as “culturally, historically, or aesthetically significant”, so we think it’s safe to say this one is definitely worthy of a top-5 spot in our Most Iconic Car Movies of All Time list.

Days of Thunder stars Tom Cruise and follows the rivalry between NASCAR rookie hotshot Cole Trickle and veteran driver Rowdy Burns. When both them are seriously injured in a major accident, they become close friends, resulting in Cole Trickle racing Rowdy’s car in the Daytona 500.

Although some of the acting and special effects leave much to be desired, and the movie has been criticised on its similarity to Top Gun, Days of Thunder is nonetheless an enjoyable, exciting movie that has achieved a cult status among motoring enthusiasts, making it worthy of our top 5.

This 1969 classic tells the story of Charlie, an expert thief who plans and executes a heist on Venice’s most secure gold store.

The film proved a success upon its release, earning critical acclaim amongst critics for the performances by Caine and Coward, the film’s reflection of British culture from the period, and the film’s climatic car chase. The Italian Job became a cult symbol of British filmography, being ranked favourably in the top 100 British films by the British Film Institute.

Most importantly, however, is the movie’s iconic car chase through Turin featuring a trio of red, white, and blue Mini Cooper Ss. This movie stands as an automotive action gem and takes our number 3 spot on the list.

The movie follows Randall ‘Memphis’ Raines, a former high-end car thief brought back into the life when his younger brother, Kip, finds himself in deep trouble with local gangster Raymond Calitri. The trouble leads to an invigorating climax: one night to steal 50 highly-specific high-end cars to be delivered to Calitri on a strict deadline, or Kip is killed.

Whilst many of the movie’s attributes leave much to be desired, and the film has been hated on by just about every critic under the sun, but there is just something about Gone in 60 Seconds that has elevated it to a true cult classic. The car sets are ludicrous, and the movie introduced us to sexy, sexy ‘Eleanor’ 1967 Shelby Mustang GT500, giving us no option but to include Gone in 60 Seconds in our top 3.

The one movie on this list that truly needs no introduction. Filled with high-octane fuelled (literally) car scenes, unrealistic action scenes, and an inside look into Dominic Torretto’s inner-circle, The Fast & The Furious is quite easily the most iconic car movie of all time.

Receiving as much hate as it does love, the Fast & Furious franchise has undoubtedly stretched itself to its very limits over the last decade, resulting in the early movies being a mere distant memory in the current-day plot line.

It is this outlandishness and continual movement away from a car-focus which arguably increases the status of the original movie, which has its roots in modified street cars and street racing, simply living life a quarter mile a time.

Obviously it’s pretty much impossible to get a definite top 10 list for any topic, so there will undoubtedly be those that disagree with our top 10 list, and you know what, even we would probably make changes to the list depending on our mood.

But nonetheless, in no particular order, here are some movies that are certainly iconic, but that didn’t make our top 10: